Can One Company Catalog Every Record Ever Made?

Can One Company Catalog Every Record Ever Made?

Discogs' ambitions have grown from being a simple database for record collectors to scouring the globe for music no one even knows exists. 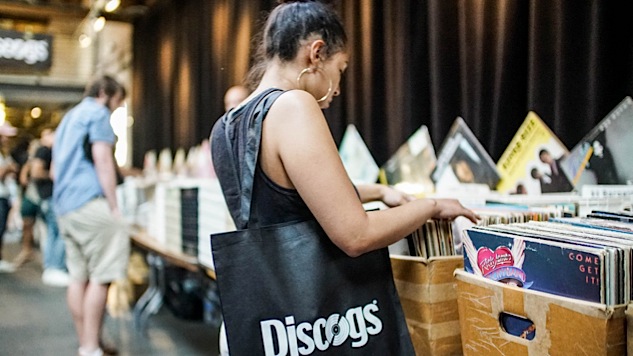 At tech conferences and venture-capital firms around the world, web developers and programmers love to mention the buzzy idea that their app or site is going to “disrupt” the status quo, even if that rarely comes to pass. But for almost 20 years, Discogs has managed to actually rattle the cages of the music industry and the undulating marketplace for buying and selling physical copies of albums. Now, it’s trying to expand its reach around the globe and find all the music that’s never been found before.

Launched in 2000 by Portland, Oregon-based programmer and DJ Kevin Lewandowski, the site’s original intent was to help folks track and share information about their record collections. But as word spread among music lovers and the site’s user base grew, Discogs evolved into a crowd-sourced hub to find information about the discographies of artists from around the world. It may not get deep into the historical details of the recording sessions, but there’s no better place to track, for example, the 674 different versions of Sgt. Pepper’s Lonely Hearts Club Band, or the 280 pressings of the first Velvet Underground album that are known to exist.

The final step of its development runs parallel to the recent resurgence in vinyl sales, as the site’s programmers responded to requests to open up a space for users to buy and sell records. Users flocked to the site, lured by its simple-to-use platform and a robust feedback system to help slap down shady dealers. The site takes a small percentage of each sale, so the move has provided Discogs with a steady revenue stream. Last year alone, it claims to have facilitated the sale of eight million records. Numbers like that were enough to knock out competitors like GEMM, which folded in 2015, and to put a dent in the number of folks selling pre-owned music on eBay and Amazon.

“When we announce that a record sells for $15,000 in a physical format as a collector’s item, surely that allows for a new piece by certain artists to be priced a little higher.”

This disruption is starting to trickle down into brick-and-mortar shops and record dealers, who are utilizing the information on Discogs concerning previous sales of a particular record to figure out what they can safely sell it for. “I can go into a record store and ask if they use the site,” says Chad Dahlstrom, Discogs’ CEO, “and sometimes they’ll say no. But then I’ll notice they have it open on a computer there. And they’ll tell me, ‘Oh we just use it to price, but we don’t sell on it.’ So everybody’s using it in different ways.”

Dahlstrom joined Discogs about four years ago, having previously worked at CD Baby, a Portland company that helps artists sell and promote new music. Since then, an office of 16 employees has grown into a much larger operation with a satellite office in the Netherlands to be able to respond quickly to their European users. Now they’re looking to open a third office in Japan. Along the way, Discogs has hit a few milestones. They boast more than four million active registered users and have been seeing some impressive deals, like an original copy of Prince’s Black Album on grey vinyl that sold last month for over $5,000 and an unreleased 45’ of the Sex Pistols’ “God Save the Queen” on A&M Records, which one lucky collector dropped nearly $15,000 on this past November.

While they don’t have data or metrics to truly prove this out, Discogs’ head of PR and strategic partnerships Jeffrey Smith believes that news like that is having an effect on the way some labels are responding amid the still-lucrative vinyl resurgence. “When we announce that a record sells for $15,000 in a physical format as a collector’s item,” he says, “surely that allows for a new piece by certain artists to be priced a little higher.”

This all may sound like a playground for serious collectors or obsessives who need to own every version of, say, Genesis’s Foxtrot. But a look at Discogs’ top-selling records from January tells a different story. Number one on that list: Pink Floyd’s Dark Side of the Moon. Also appearing the top 20 were common-core fare like Thriller, Rumours and Hotel California.

What that reveals is exactly why Discogs has been able to be such a disruptor in the online music community. It’s earning enough attention worldwide to be able to attract more casual music fans who are content to fill their shelves with canonical albums instead of esoteric rarities. Another factor is how Discogs has managed its growth. One new feature, “Tracks,” lets users see all the different places where a particular song has been released. According to Dahlstrom, that added about 99,000 new URLs to the site’s servers. They’re also making sure to support the many dealers who rely on the site by setting up “Crate Diggers” events where sellers can offer their wares in person, and where Discogs employees can meet their users face-to-face.

Beyond that, says Dahlstrom, he and the rest of the Discogs team have that one big goal in their sights: cataloguing every record ever made. “It’s kind of hard to estimate what percentage is on there,” he says. “I’m pretty sure we’re quite over 50, 60 percent. But if I got into South America, we don’t have nearly as many contributors down there, where there’s a tremendous amount of music. You go east into Russia, India, China, South Korea. There’s archives of music there that we don’t even know about. That international expansion is something we’re focused on. And the marketplace gets to come along for the ride.”