The electronic musician and veteran soundtrack composer turns his interpretive abilities to a single episode of Charlie Brooker’s dystopian Netflix series, to subtle yet compelling effect. 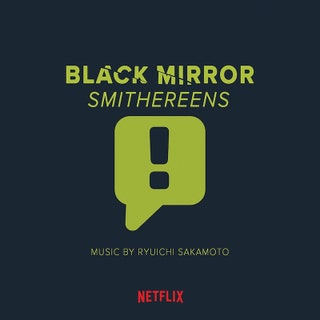 “Smithereens,” the second episode in the fifth season of “Black Mirror,” opens with a rideshare driver meditating in his car, assisted by an app, outside the towering headquarters of a tech giant. It’s a beautifully concise haiku of our historical moment. Observe as the worker, isolated and at the mercy of opaque algorithmic tweaks, hustles his way through the gig economy, using the same technology that has wreaked havoc on job security to steady his mind. He cannot afford to panic, is in fact desperate to stay in the moment. But how much are these attempts at serenity mere flailings against capitalism and the inescapability of the internet?

That the episode (in fact the whole season) explores such issues with the milquetoast characterizations and shallow twists of an M. Night Shyamalan film is a disappointment to all who thrilled to “Black Mirror”’s pre-Netflix incarnation. But at least it’s got a classy soundtrack. Ryuichi Sakamoto—composer, electro-pop pioneer, buddy to David Bowie, and synthesizer legend—was brought on to score “Smithereens.” His work since the late 1970s has taken him from the top of the charts to the monastic depths of the avant garde, but regardless of context, Sakamoto’s music has consistently exuded a profound empathy. Whether leading Yellow Magic Orchestra’s cheeky pop, collaborating with cranial ambient artists, or, more recently, confronting his own mortality, Sakamoto’s music expresses in a few elegant gestures the haunting richness of life.

“Meditation App” is the first piece on the soundtrack, and, at over five minutes, the only one that truly works as standalone music. Airy and soothing, it floats with a single-minded aspirational splendor. In the episode, the meditation is guided with gentle directions to remain open and non-judgemental to whatever thoughts come up. This profoundly difficult prompt is delivered with a grating, faux-enlightened calm that sidesteps the harrowing depths of the psyche, and “Meditation App” perfectly embodies this flowy, insubstantial bid at inner peace. Its dulcet timbres suggest the immanence of a world without conflict, without pain or paradox, loss or grief. Perhaps we nurse private fantasies of a return to such an Edenic womb, but the music’s effect has a killing-with-kindness quality. Sakamoto plays it straight, never introducing even a drop of skepticism into the mix, and in doing so allows the show to weaponize the language of wellness. “Meditation App” could be looped in the lobby of a high-end spa, and no one would care to ask who composed it. This means Sakamoto did his job.

The rest of Black Mirror: Smithereens is filled with the type of dark, pulsating synthesizers that have found equal favor in techno clubs and modern, edgy thrillers. It isn’t surprising that the mood is one of rising tension, with rhythms that suggest a predator on the hunt (there’s even a piece called “Prey”) and thick, gelatinous drones that suck the air out of the room. Sakamoto effectively conveys a looming state of emergency with the bare minimum. Here a bass riff groans and then spasms to life, there a flicker of white noise recalls a nervous tic. “Closing In” lightly clutters its background with distant sirens, then fades into an uneasy clearing. “Flashback” keeps its sentimentalism at bay, cloaking its melody with dissonance and water-droplet sounds before quietly blooming for a moment of pure ache. Isn’t this how memories work, slowly rising from the depths before coming into sharp, agonizing focus?

These minor details are easy to ignore while caught up in the drama of Black Mirror: Smithereens. Even listening casually at home, they remain steadfastly integrated in a moody, fluid whole. The 44 seconds of “Gun Is Real” hardly register as music, though they are powerful in context. This isn’t a problem, but it does suggest the score for Black Mirror: Smithereens will be loved by two groups only: those with an abiding hunger for all things “Black Mirror” and those with the same hunger for Sakamoto. Soundtracks are difficult to comment on unless they are either exceptional or awful. The best walk a fine line, enhancing each moment of action while not quite stealing the show. Describing Halloween, actor Nancy Loomis said: “The first time I saw the movie, it was a rough cut without the music, and I thought, ‘Oh, this is so forgettable.’ Then I went to a screening when the score was finished, and I was floored by how terrifying the movie was.” While Sakamoto here offers no iconic melodies, the sentiment holds. “Smithereens” may falter as an episode, but it would be dead in the water without his contributions.