Released in conjunction with three 180 gram limited edition LP’s ‘Live And Rare’ is a collection of The Yardbirds, live and in the studio, featuring performances with all three famous lead guitarists, Eric Clapton, Jeff Beck and Jimmy Page, recorded between 1964 and 1968. The box set on review here contains four CD’s and a DVD and includes the material released on ‘1967: Live in Stockholm &, Offenbach’ and ‘1966: Live And Rare’ as well as ‘Dazed And Confused: The Yardbirds in ‘68-Live At The BBC And Beyond’’ the three LP’s referenced as well as many more tracks, audio and video, and like the vinyl releases is a limited edition. 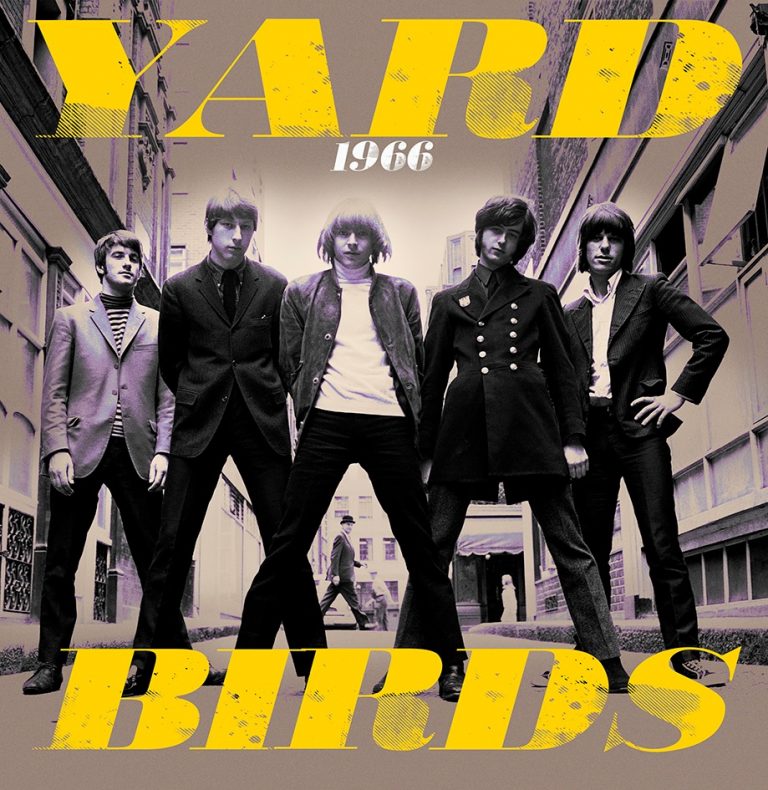 Disc one titled ‘1966: Live And Rare’ features seventeen tracks from the Jeff Beck years, the Jimmy Page years, and the brief Beck/Page period, as well as Keith Relf solo recordings, beginning with three live takes from the French TV’s ‘Music Hall De France’ on July 22, 1966, with Beck on guitar and Page on bass. They are all tunes very familiar to Yardbirds fans such as ‘Shapes Of Things.’ Next up are two tracks from the Sanremo Music Festival, January 27-28, 1966, the less familiar ‘Paff Bum’ and ‘Questa Volta’ both featuring Beck. Two radio commercials, for a milk shake chain and toothpaste company are next in line with Page leading the Beck-less quartet version of the band. ‘Live At The New Music Express Winners Concert’ from Wembley on May 1 features the Beck led quintet on its two tunes. The group’s mono recordings of the ‘Happening Ten Years Time Ago’/’Psycho Daisies’ single the former with Beck and Page on guitar, the latter, a rare trio take with Beck on guitar and Page on bass joined only by drummer Jim McCarty and ‘Stroll On’ from the ‘Blow Up’ soundtrack, another rare take with Beck and Page both on guitar follow. The disc closes with Keith Relf’s five mono single recordings from 1966 that fans will be quite familiar with. The contents of this disc are contained on one of the three 180 gram orange vinyl releases related to this box set, ‘1966: Live And Rare.’ 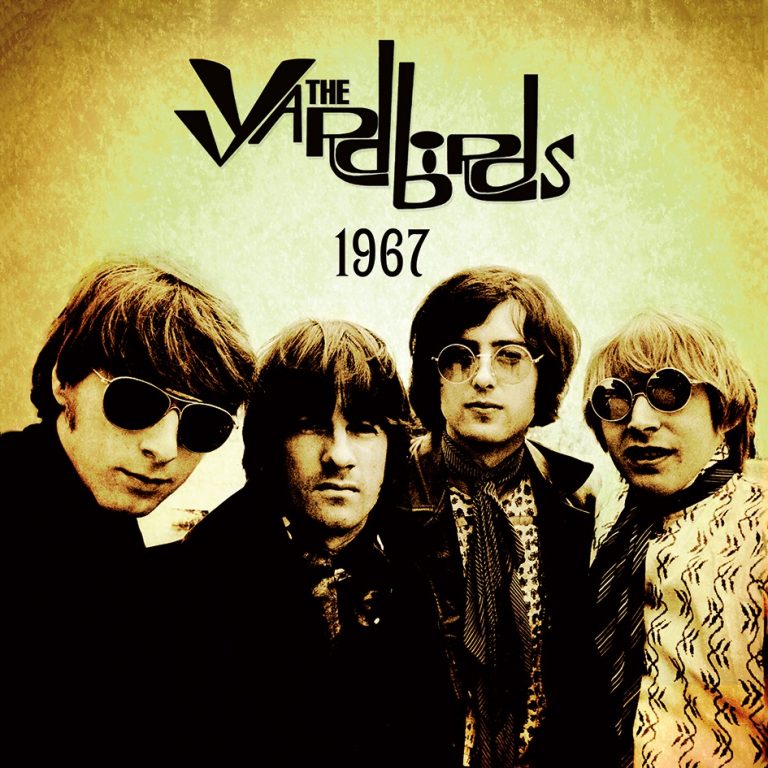 Disc two contains the ‘1967: Live In Stockholm, Offenbach and Paris’ recordings from March and April, 1967 all by the Page led quartet final incarnation of The Yardbirds and twelve of the nineteen cuts are also available on 180 gram orange vinyl release ‘1967: Live in Stockholm & Offenbach.’ The performances are a virtual “greatest hits” of the band, given the Page driven guitar twist. The tracks range from the early hit ‘I’m A Man’ to later hits ‘Over, Under, Sideways, Down’ and ‘Happenings Ten Years Time Ago’ taken from the Offenbach performances on German TV’s ‘Beat! Beat!’ show in March, 1967, the latter two tracks joined by a take on the group’s classic ‘Shapes Of Things’ appear on the vinyl release documenting this appearance. Next up are eight tracks from a gig at the Konserthuset in Stockholm on April 4, 1967. Highlights include two tracks from the Page era LP ‘Little Games’ namely the album’s title track and ‘My Baby’ as well as a take on Bob Dylan’s ‘Most Likely You Go Your Way (And I’ll Go Mine).’ All eight tunes are included on the vinyl release. The disc closes with seven tracks recorded at Grand Spectacle De Jeunes in Paris on April 30, 1967, which are not included on the vinyl release due to time limitations, and thus add value to this box set. Among them is a take on ‘Train Kept-A Rollin’ which is the lone tune not included on the LP in any form, but is nonetheless of great interest in documenting the band’s Page era.

Disc three is aptly titled ‘Dazed And Confused’ which is comprised of ten tunes taken, as the vinyl title implies ‘Dazed And Confused: The Yardbirds in ‘68-Live At The BBC And Beyond.’ Highlights include two takes on Tony Hazzard’s ‘Goodnight Sweet Josephine’ and two takes on the classic ‘Think About It’ taken from performances at The Playhouse Theater in Manchester on March 5-6, 1968 and French TV’s ‘Moulon Rouge’ on March 9, 1968. Also of special interest is an instrumental take on ‘White Summer’ from Manchester. For those purchasing the vinyl edition of the set, the ten audio tracks are joined by a DVD containing the three tracks from the ‘Moulon Rouge’ performance, with the disc’s title track joining the two tunes previously mentioned. Although rather short on run time, the disc is a wonderful overview of the Page led edition of the band. 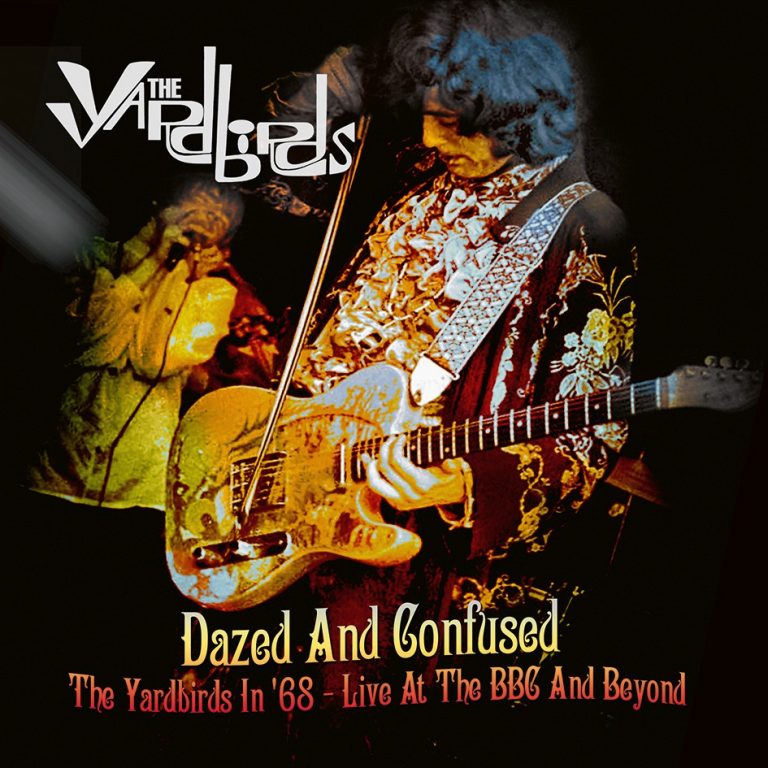 Disc four ‘1964-1966-Live At The BBC And Other Broadcasts’ collects twenty one takes from the Clapton and Beck led versions of the band with performances ranging from July, 1964 BBC and August, 1964 National Jazz & Blues Festival showcasing the early period of the Clapton led Yardbirds to May and July, 1966 takes of the Beck edition on ‘Jeff’s Boogie’ all presented in mono sound. In total there are nine tracks featuring Clapton and twelve with Beck. Of note are recordings of early Yardbirds’ gems such as ‘Spoonful’ and ‘For Your Love’ featuring Beck, rather than Clapton, on lead guitar, giving the listener a nice contrast in the sound of the band in the different incarnations.

The box set is rounded out by a twenty-one track, hour long DVD titled ‘Live And Rare 1964-1968’ with performances by all the best known versions of the band, although the Clapton and Beck led incarnations are represented by only two tracks each, with three tracks featuring Beck on lead guitar and Page on bass and the remaining fourteen tracks being performances by the Page fronted Yardbirds in 1967 and 1968. While some may be disappointed with the disproportionate inclusion of material by the Jimmy Page era band, the DVD goes a long way in filling a gap documenting the band’s latter day performances, making it of special interest. The track list includes takes on band classics such as ‘Shapes Of Things’ and ‘Train Kept A-Rollin’ as well ‘I’m A Man’ and ‘Heart Full Of Soul’ and tunes integral to the Page years such as ‘Goodnight Sweet Josephine’ and ‘Dazed And Confused’ in addition to tracks from the Beck/Page transition period ‘Happenings Ten Years Time Ago’ and ‘Over, Under, Sideways, Down’ making ‘Live And Rare’ an important release in the Yardbirds catalog. 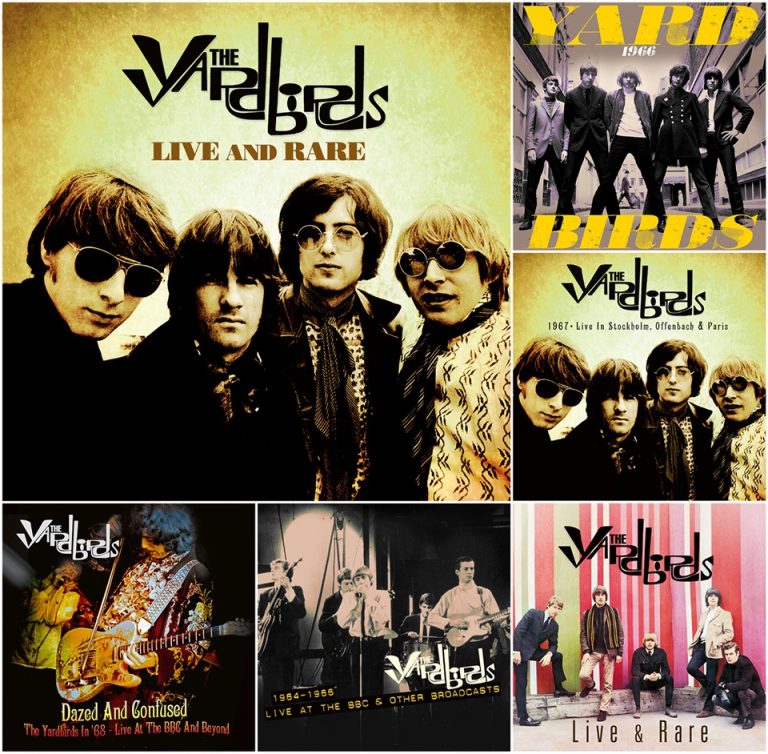 ‘Live And Rare’ comes with each of the CD’s and the DVD in cardboard mini-LP gatefold sleeves housed in a hard cardboard slipcase. Each disc comes with extensive liner notes by music journalist and critic, Chris Welch. The box set is rounded out by a thirty-six page booklet with an essay and especially helpful track by track annotations by Mike Stax, the annotations being essential in discerning which version of the band is included in the box set’s ninety-one tracks, all in all making for a set which will be of great interest to fans of 1960’s rock, The Yardbirds, and especially to fans of the Page era version of the band. The set comes very highly recommended.