‘Sittin’ In’ is based on a newly-discovered archive of jazz club souvenir photographs and memorabilia, and tells the little-known story of how America’s jazz clubs were among the first places during the Jim Crow era where Black and White people mixed, in audiences and onstage, decades before Jackie Robinson broke baseball’s color barrier. 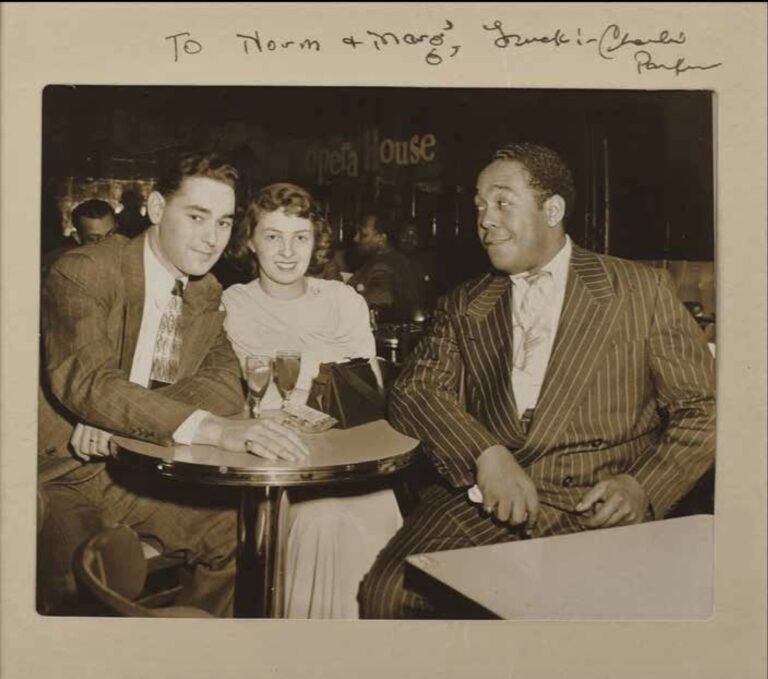 Charlie Parker with an unknown couple at New York’s Royal Roost, circa 1948 | © Sittin’ In, Jeff Gold

Jeff Gold is a Grammy Award-winning music historian, archivist, author and executive. One of top collectors of music memorabilia. He is an internationally recognized expert who has consulted for the Rock & Roll Hall of Fame, Museum of Pop Culture (EMP), and various record labels and cultural institutions. A former Executive Vice President/General Manager of Warner Bros. Records and Vice President at A&M Records, Gold worked with Prince, REM, Madonna, The Red Hot Chili Peppers, The Police, Cat Stevens, Soundgarden, and Janet Jackson. A four-time Grammy nominated art director, Gold won a Grammy for Suzanne Vega’s album ‘Days of Open Hand’. A music historian and researcher, Gold has discovered a number of previously unknown tapes later released by major labels, including ‘Bob Dylan at Brandeis University 1963’ and unreleased performances by the Velvet Underground and The Stooges. He was a producer of the album ‘Stone Free: A Tribute to Jimi Hendrix’ (with Eric Clapton and Jeff Beck) and worked on archival projects for Jimi Hendrix, Bob Dylan, the Grateful Dead and Gram Parsons. His discovery of 149 previously unknown Bob Dylan acetate records received extensive media attention. In 2016, Gold and colleague Laura Woolley appraised The Bob Dylan Archive for Dylan’s management; he has also served as an archival consultant for former Rolling Stones bassist Bill Wyman and the estate of Leonard Cohen.

‘Sittin’ In’ is a fascinating book. It’s based on a newly-discovered archive of jazz club souvenir photographs and memorabilia, and tells the little-known story of how America’s jazz clubs were among the first places during the Jim Crow era where Black and White people mixed. It’s more relevant than ever. What inspired you to write ‘Sittin’ In’?

Jeff Gold: It all began when I discovered and purchased an archive of rare, and previously unknown photographs from jazz clubs of the forties and fifties. Even as I was buying them the thought occurred to me that these would make a fantastic book. I’ve been collecting and dealing in music memorabilia for nearly 50 years, and thought if I hadn’t seen things like this, they must be pretty rare. As I looked around on the internet, I couldn’t anything like these.

I began collecting records as a young teenager, and that collecting grew to music memorabilia, and a job as the first employee at the Rhino records store in Los Angeles, which then turned into the Rhino label. I went on to executive positions at A&M Records and Warner Bros. Records, and have always been obsessed by music and records. For over 20 years I’ve had a business buying and selling rare records and music memorabilia, Recordmecca.com. And I do consulting for various artists, including having appraised Bob Dylan’s archive for his management, and consulting for Bill Wyman of the Rolling Stones. I’ve written two previous books on music topics, ‘101 Essential Rock Records: The Golden Age of Vinyl’, ‘From The Beatles to the Sex Pistols’, and ‘Total Chaos: The Story of the Stooges/As Told by Iggy Pop’. 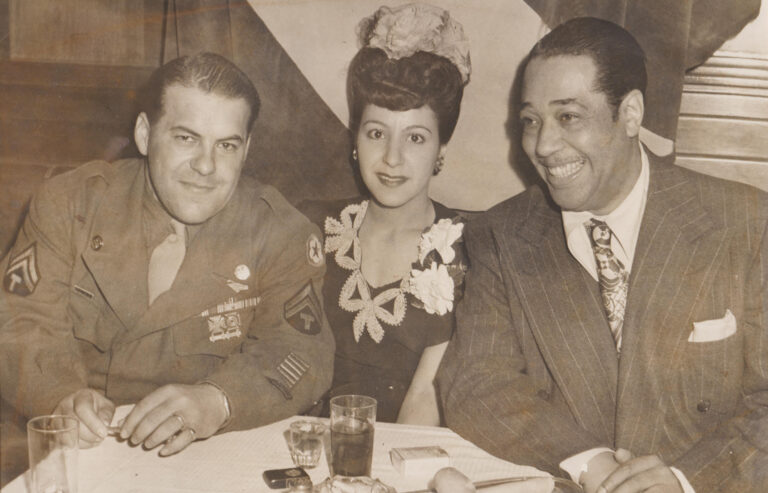 Duke Ellington, actress Joan Davis, and a soldier at the 400 Restaurant, 1945

How difficult was to gather all the information?

It was extremely difficult to research some of these clubs, about which barely any information exists. I read or skimmed 40 books, spent an enormous amount of time online doing research, as well as speaking with Sonny Rollins, Quincy Jones, jazz historian Dan Morgenstern, and others to hear about their experiences in these clubs. 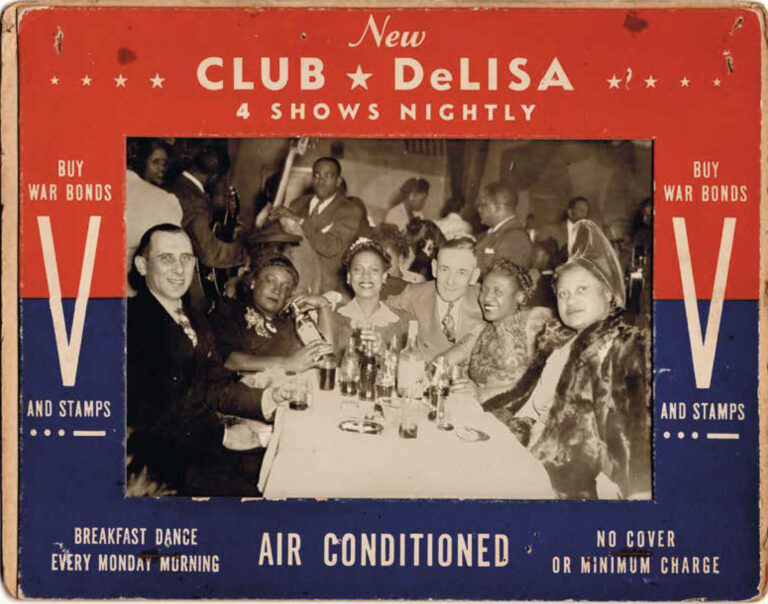 There are two quotes that I would like to point up. “Jazz was really where the racial barriers were broken down heavily,” Sonny Rollins. “Back then, it wasn’t about color in the clubs, it was about how good you can play. Racism would’ve been over in the 1950s if they’d listened to the jazz guys,” Quincy Jones. How would you elaborate on that from today’s perspective?

I was surprised when I heard that from Quincy Jones and so I followed up with Sonny Rollins and the others I interviewed. It’s a remarkable and little-known story that these clubs were some of the earliest places Black and White people could congregate during the Jim Crow segregation era in America, and that as Quincy and Sonny told me, these were important places that were kind of an oasis from racism. 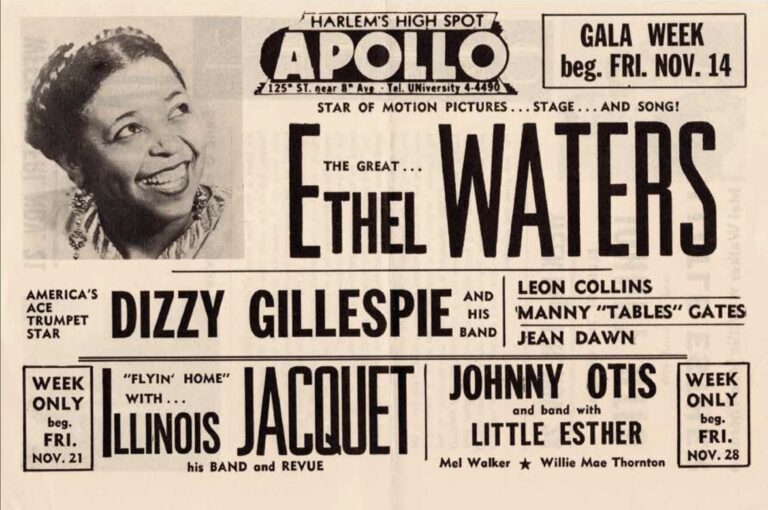 How long did it take to complete this massive project, from conception to publication?

Many of these came from one collection, from a gentleman who had spent 30 years accumulating jazz memorabilia. Others I found in auctions, on eBay, and borrowed from collectors. 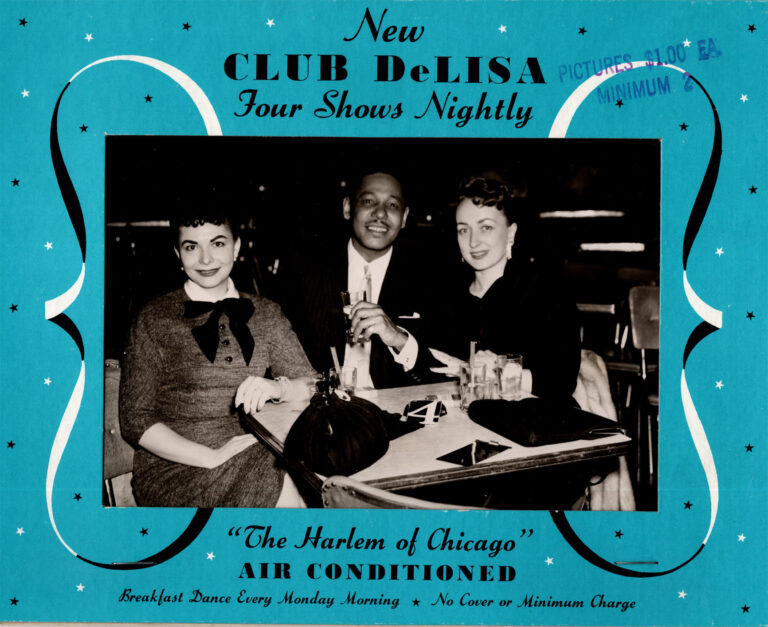 What are some essential milestones albums from that period of time in your opinion?

That’s a hard one. I Really Love ‘Moanin” by Art Blakey and the Jazz Messengers, Miles Davis records from that time, including ‘Kind of Blue’ of course, and pretty much anything from that era by Thelonious Monk, John Coltrane, and many many others.

There’s also a wonderful chapter about the jazz history in different clubs and scenes. Would it be possible to elaborate how the scene in New York City is different to the scene in Chicago or San Francisco? And what made it so?

Obviously I wasn’t there, but Sonny Rollins and Dan Morgenstern told me that it was pretty similar wherever you went. I think people who liked the same thing congregated in these places, and there was a lot of camaraderie. Sonny did tell me that San Francisco in particular had a more Bohemian feel than other places.

Is there anything we have not addressed that readers should be made aware of?

I would suggest anybody reading this check out my website, SittinIn.com, where you can see layouts from the book, examples of some of these photos, read my introduction, and listen to a playlist we put together that is sort of a soundtrack to the book. 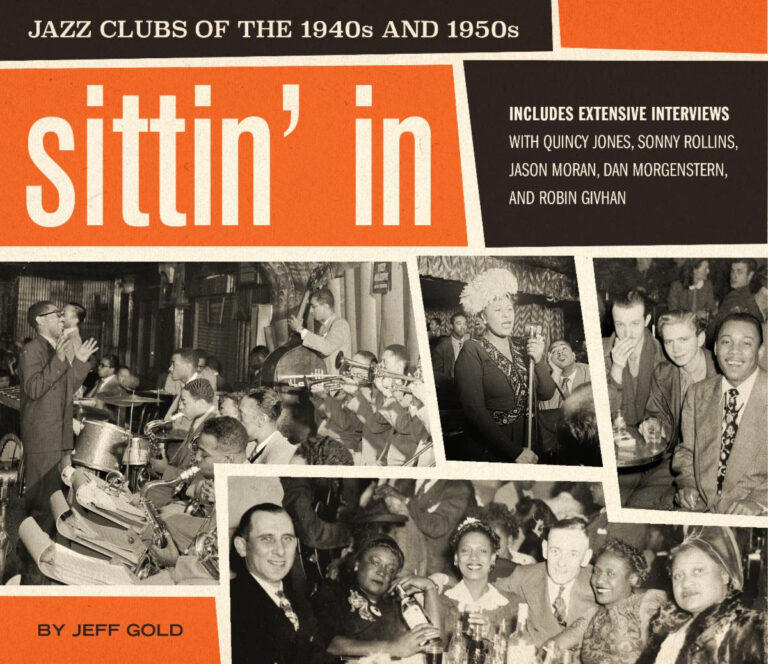 What’s your opinion about the current state of jazz music?

I think the music is vibrant though obviously the Covid 19 crisis has made seeing live music impossible, and that’s a huge strain for both musicians and fans.

How are you currently coping with the world pandemic and what are your predictions for the music industry?

I’m doing well and am very grateful for that. I’ve heard from a lot of fans and writers that this book is bringing frustrated club-goers joy, and I’m happy about that. I think when this crisis is over there will be an explosion of people going to see live music, and though this time has been a huge strain on many in the music business, I’m confident live music will come back, hopefully stronger than ever.

Thanks for your time and interest, and I hope people are able to check out SittinIn.com to get a better idea of what this is all about.