Ground-breaking multi-instrumentalist Howard Johnson passes away at the age of 79.....

Ground-breaking multi-instrumentalist Howard Johnson passes away at the age of 79..... 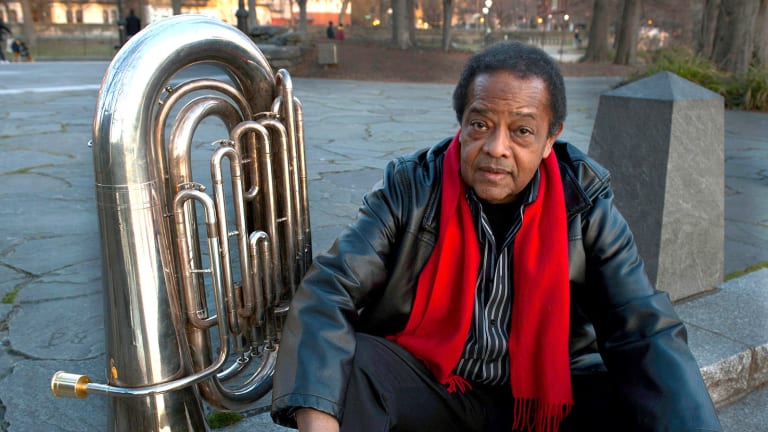 Johnson played an important role in forming and shaping the sound of the Saturday Night Live band during the show’s first five years: 1975 to 1980. Donning an Egyptian headdress or nurses’ uniform in some of the most beloved early sketches featuring Steve Martin and Lily Tomlin, his weekly SNL appearances lent Howard visibility rare for a jazz musician or in-demand sideman. He appeared in Martin Scorsese’s 1978 documentary The Last Waltz, was featured in a Miller Lite beer commercial in 1984, and made a Sesame Street appearance with James Taylor (in the decades since, it wasn’t uncommon for excited kids to point at Howard and shout “Jelly Man Kelly!”).

But Howard initially turned down the SNL gig, telling musical director Howard Shore that having a too-steady job leads to complacency, resulting in bad music. Musicians in that situation “start defending their turf, they start feeling like they have something to lose, and they keep narrowing and narrowing their perspective. I don’t want to get caught up in stuff like that.” In several interviews, Johnson recalled Shore’s reply: “Well, if you feel that way about it, then you’re the man for the job. Get me a bunch of other troublemakers like you and we’ll have a great band.”

Complacency was never a possibility for Johnson. In fact, from his earliest years in New York, the breadth of his capabilities led some critics and audiences to believe there must be more than one Howard Johnson: It was just too hard to imagine that in an often highly compartmentalized music scene that the same guy could be appearing with the avant-gardist Archie Shepp, hard-swinging drummer Buddy Rich, and sitting in with bluesman B.B. King.

In fact, Johnson crossed paths with legendary guitarist Jimi Hendrix at a B.B. King gig, as detailed in an April 12, 2017 blog post (hojotuba.com/blog). He and fellow tubist Bob Stewart took their instruments up to Ungano’s [an Upper West Side club] to jam with B.B. King. Just the presence of that much low brass was enough to cause a stir, and right before they went on, Jimi Hendrix arrived with a group of women. The audience was distracted, buzzing and cracking jokes, not knowing what to expect from a couple of tuba players.

Howard and Bob took to the stage, one on either side of B.B., and showed everyone they know their way around the blues. Though there were no mikes, they made themselves heard, with power to spare. Afterward, Jimi sought out Howard to congratulate him, saying, “You brothers just did the god-damnedest shit I ever heard! Ain’t nobody laughin’ now!”

While he played an arsenal of instruments, there was no doubt the tuba was his greatest love. “A tuba can be thunderous, it can be a rough-and-tumble instrument. People don’t think of it as anything delicate. I never thought there was anything the tuba couldn’t do, and I’ve been pretty satisfied with what I can do with a tuba,” Johnson mused in a 2019 interview for Hot House jazz magazine.

By 2006, when New York Times critic Nate Chinen declared Howard Johnson “the figure most responsible for the tuba’s current status as a full-fledged jazz voice,” the life’s work of the multi- instrumentalist had been in progress for more than four decades. Johnson burned with the fire of bass-clef innovation since well before 1963, when he took an offhand remark from Eric Dolphy as a call to action to move to New York.

As a teen, Howard had discovered that he could push the tuba’s range to previously unheard heights—more than six octaves—surpassing the trombone on the high end and edging into trumpet territory. In a 2000 interview, Johnson noted that he was motivated to excel by a pecking order among high school band members, with those who took private lessons outranking those who learned at school, and the self-taught—like Howard—at the bottom. When one of the private students asked him how high the tuba could go, “I was very embarrassed that I didn’t know,” he recalled. He began to experiment, noticing some of the highest notes were “very pretty; they sounded like they had kind of a French horn quality. So I added that new octave to my warm-ups.” He was surprised to discover that none of his bandmates could play anywhere near that high. “At that point, I’d probably been playing about six or eight weeks. I was highly motivated. I didn’t want to look like a fool,” Johnson said. “It was at that point that I decided not to let anybody tell me what the limitations were of the tuba or of the music.”

He was never a novelty act who would occasionally blast notes into the stratosphere to excite an audience. Rather, he played melody lines and solos fluidly and fluently, maintaining tonal integrity and feeling. Though there was no existing repertoire in the early 1960s for his then-groundbreaking low-brass range, once in the Big Apple Johnson caught the ear—and piqued the imagination—of Charles Mingus.

The iconic bassist/composer wrote adventurous parts for him in such a high register that “even trombonists wouldn’t welcome seeing those notes on the page,” Johnson recalled in 2017, for the liner notes of Testimony, his last release fronting his multi-tuba band Gravity.

Johnson became the muse of other composers, including Carla Bley and Gil Evans, establishing relationships lasting decades. Howard almost had a second encounter with Hendrix, in a project with the great Gil Evans, who had made plans to record with Hendrix and told Howard Johnson he wanted him in the studio, too. Unfortunately, Jimi didn’t live long enough to make the gig. But Howard eventually got to have his say on one of Jimi’s greatest tunes, “Voodoo Chile,” on Gil Evans’ recordings, and was also known to play a lovely, tender version of “Little Wing” on pennywhistle.

Every post-Johnson tuba player has been challenged by the standard he set. He believed the tuba is capable of a virtually unlimited sonic and emotional range, based on a player’s abilities. By demonstrating his skills, Howard single-handedly moved the instrument out of its traditional place in the rhythm sections of large ensembles into featured roles in small bands. Recognizing his impact on the tuba’s changing role in music, in 2008 the instrument-maker Meinl Weston released the HoJo Gravity Series tuba, designed to the player’s specifications.

He influenced musicians by expanding their ideas of the possibilities of the instrument, and demonstrated enormous generosity of spirit, mentoring tuba players, past, present and future. He influenced jazz (and pop) composers and arrangers by bringing a heretofore ignored instrument to the front line of soloists, and changed jazz overall by altering the direction of how jazz used the bass clef—no more oom-pah-pah, but pure linear bop, swing and rock phrasing that could stand on its own against any other “typical” jazz solo instrument.

At a time when jazz-rock fusion was gaining traction, Johnson opened up the music without diluting the tradition, performing with an unwavering jazz sensibility as a founding member of the Saturday Night Live band. His writing, arranging and playing captured the attention and imagination of such pop culture icons as John Lennon, Paul Simon, Levon Helm and Taj Mahal; Johnson never dumbed it down, never resorted to spoon-feeding anyone “Jazz 101” level music. He has always been “The Real Thing,” as Taj Mahal dubbed the 1971 CD that debuted Johnson’s innovative multi-tuba brass choir, Gravity.

Even as he approached his 75th birthday, Johnson declared that he still had the fire in his belly to solo, to increase awareness of the versatility of often-underutilized horns, and to continue to have his say on the definitive way to play them. After the music master no longer made a practice of hoisting the 20-plus pound instrument to his lips—his last gigs were in 2017—he continued to feel he had much to offer as a mentor and advisor.

There’s a wonderful accessibility to Howard Johnson’s artistry. Whether playing a standard from a Broadway show, taking the lead on Hendrix’s “Voodoo Chile” with the Gil Evans Orchestra, or evoking early R&B beats on Don Pullen’s “Big Alice” with Gravity, his music could get under your skin and quicken your steps for days to come.

Howard’s talent, determination, and no-limits viewpoint were irreplaceable ingredients in his recipe for artistic fulfillment and professional success, and his music will continue to inspire for years to come.

Howard is survived by his longtime life partner, Nancy Olewine; his daughter, musician Nedra Johnson; and two sisters, Teri Nichols and Connie Armstrong. He was predeceased by his son, David Johnson, a musician and artist, in 2011.

A memorial service will be held in 2021.

In lieu of flowers or other tributes, it was Howard’s wish that to honor his memory and support his legacy as a master of the bass clef, memorial donations be made to benefit:

Memorial donation checks in memory of Howard L. Johnson to benefit the Howard Johnson Tuba Jazz Program Fund can be made payable to The Pennsylvania State University and mailed to:

Donations also can be made via credit card at: raise.psu.edu/CelebratingHowardLJohnson

The endowment will support a residency in Howard’s name, and the music that Howard held so dear.