Bluesman Tomcat Courtney has passed away at the age of 91. Born in 1929, Courtney grew up in Texas, where picking cotton was the family business. As he once told the Reader, “Well, I had my own sack at the age of eight or nine years old. I could carry up to 70, 80 pounds.” 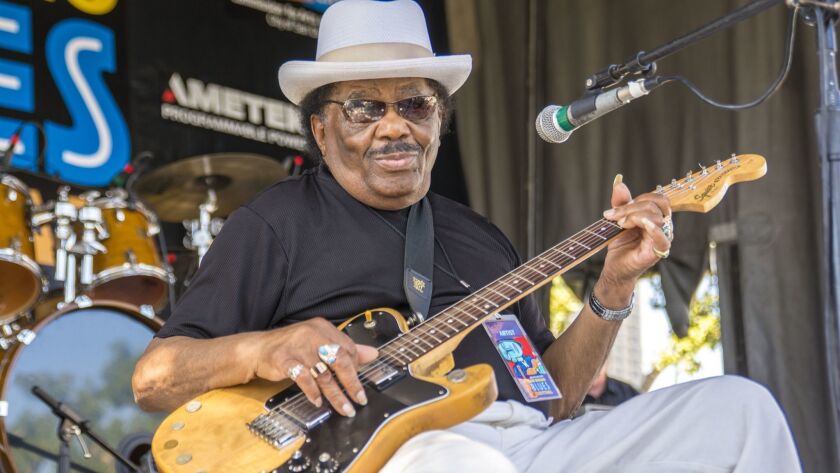 It was in fact his background in gardens that resulted in his obtaining his first guitar. “Man said, ‘Will you come on over and help me pull weeds in my garden? I’m gonna give you this guitar.’ We pulled weeds all day. He tried to show me how to play country-western, but I just hated what he was doin’.”
Later, his pianist father owned a nightclub frequented by players who’d become blues legends. “Sonny Boy Williamson, Lightnin’ Hopkins, Tampa Red would come out to the farm and perform. Saturday. Sometimes on a Friday night. The people made their own whiskey and stuff out there. They made wine and whiskey [during Prohibition]. But I tell you something: As long as it stayed on that farm, the law didn’t come out there. I didn’t think about it ’til years later, all that shit people were makin’.”

At the age of 16, Courtney was hired on as a tap dancer and a singer in the Ringling Brothers Circus minstrel show. He’d taught himself to tap dance after seeing Mr. Bojangles (Bill Robinson) perform on the family farm.

After Ringling Brothers, Courtney continued to perform in traveling variety shows. Learning guitar, he fell easily into the laconic, traditional Delta blues groove. As for his nickname Tomcat, “It was some woman in New Mexico that gave me that name,” he says. “And people been callin’ me that ever since.”
He relocated to California in the 1960s, first to Los Angeles and then to San Diego in 1971. Here, he formed the Bluesdusters, who became house regulars at O.B.’s Texas Teahouse, where he played every week from 1972 to 1992.

After his album San Diego Blues Jam was released by Advent Records in 1974, he mainly concentrated on live performances. Later in his career, he sometimes sold cassettes or pressed his own CDs to sell at gigs. Len Rainey & the Midnight Players recorded Courtney’s song “Shake It Up Baby” for their 2000 album I Better Move On.

Signed to Blue Witch Records at the age of 79, his album Downsville Blues was released in May 2008. It includes many of his own compositions, as well as classic covers like Mance Lipscomb’s “Meet Me in the Bottom” and Tampa Red’s “Cryin’ Won’t Help You.”
Downsville Blues was number one on several of the European blues charts in 2009, and his European charting and record sales earned him an invitation to the prestigious 2010 Montreux Jazz Festival. After playing Montreux and touring Europe, Courtney was inducted into the California Blues Hall of Fame.
​
In 2010, he won Best Blues at the San Diego Music Awards. In early 2013, he landed a residency playing old-school one-man blues concerts at La Gran Tapa every Tuesday. The following year, the San Diego Music Awards gave him a Lifetime Achievement statue.
Even into his 90s, right up until the pandemic lockdown, Courtney was still playing gigs every week.