Agapanthos were a great Greek band that formed in the 70s and released a hippie folk rock album in 1976. 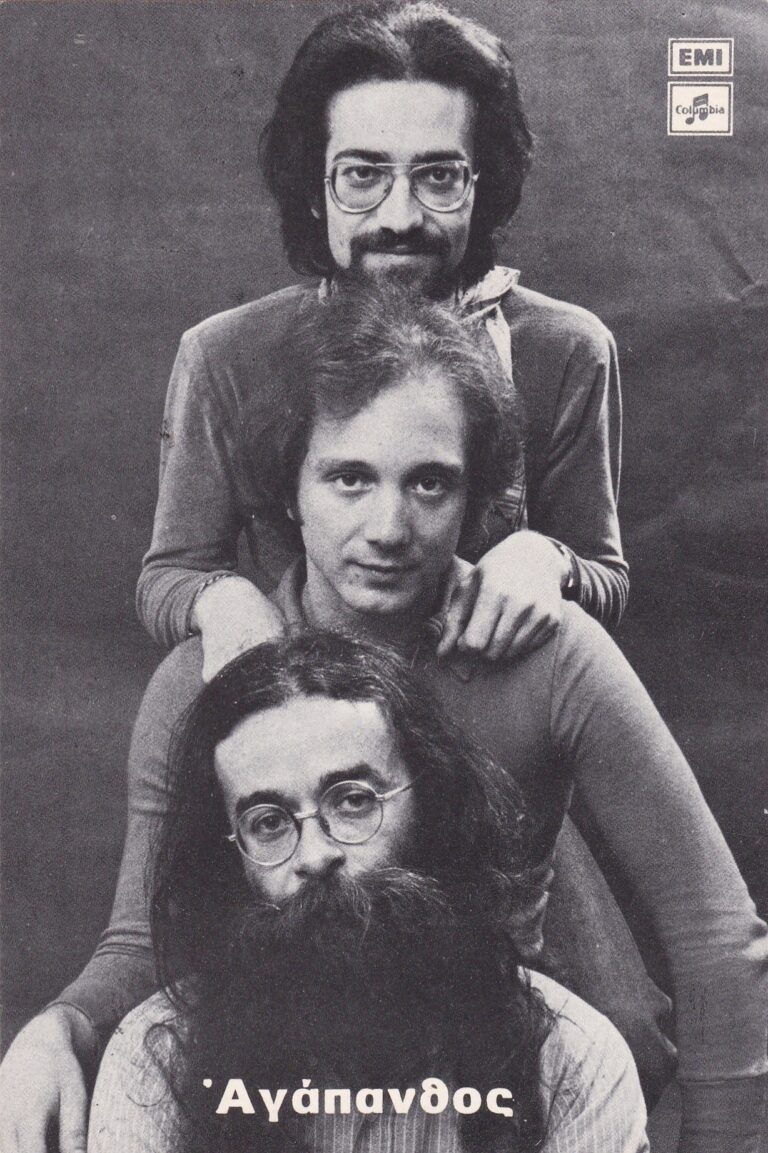 Where and when did you grow up?

Stefanos Dekerian: I was born and raised in Athens, where I live until today.

When did you begin playing music? What was your first instrument? Who were your major influences?

I started playing acoustic guitar in my early middle school years (I was about 14 years old) and much later I attended music conservatory, where I started getting occupied with the piano. My first influences were mainly some ‘60s bands, such as The Beatles and The Rolling Stones and a bit later, Bob Dylan, Simon & Garfunkel, Crosby, Stills, Nash & Young and the folk-rock music, in general. As I was continuously occupied with the art of music, mainly as a conservatory student, I got also inspired by classical music, jazz and later, I was impressed by the work of Manos Hadjidakis.

What bands were you a member of prior to the formation of Agapanthos?

The first band I ever formed was just after high school ,around 1973 and was called “Anazitisi” (aka Pursuit), a four-member group, until I met the members of “Agapanthos”, a couple of years later. 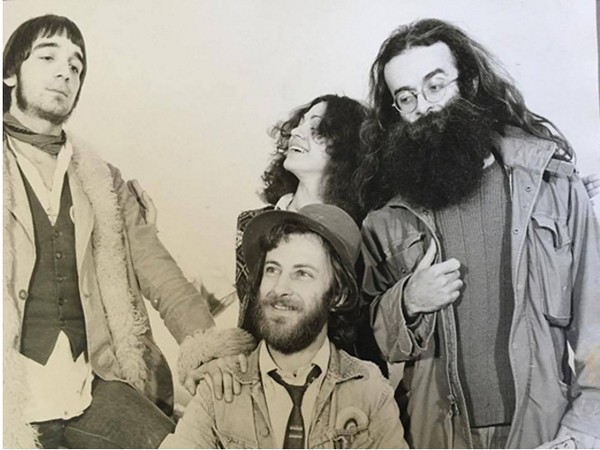 Can you elaborate the formation of Agapanthos?

Around 1975, I had sent some of my demos to ΕΜΙ-Columbia, until its producer Yiannis Kiourktsoglou, heard them and proposed me to collaborate with an upcoming group, whose disc he had been preparing. That’s how I met Dorian Kokas and Thodoros Tryfonas, who had already released a single with Haris Katsimihas (who eventually abandoned them). Therefore, after our agreement, we created Agapanthos as a trio, collecting new material for our first LP.

What was the music scene in Greece?

Near the end of 1976, the era of our first LP, the Greek music scene was dominated by the political music (mainly by Mikis Theodorakis) and the songs of the resistance (‘antartika’ ,as we call them). This situation was natural, because it was just two years ago that the Greek republic had been restored, after seven years of military dictatorship. Since the mid ‘60s, the country’s pop scene started rising, as we had new bands getting created one after another in all the big cities, following the musical and sociopolitical currents that had already been dominating in the west world. The reinstatement of the democracy, brought changes to the lifestyle and the way of thinking in Greece, by having new sociopolitical data, affect as is natural, people’s aesthetics, from the clothes they wear, to their culture and education.

When and where did Agapanthos play their first gig? Do you remember the first song the band played?

The first time we played as Agapanthos was in the amphitheater of the American College Of Athens (Deree) at around 1975 and almost simultaneously we performed live on the national TV channel. I recall playing Dylan’s ‘Blowing In The Wind’ there and the tracks of our first single: ‘Η Μπαλάντα της Ελένης’ (Helen’s Ballad) and ‘Σαν Όνειρο’ (Like a Dream), during the first gig. 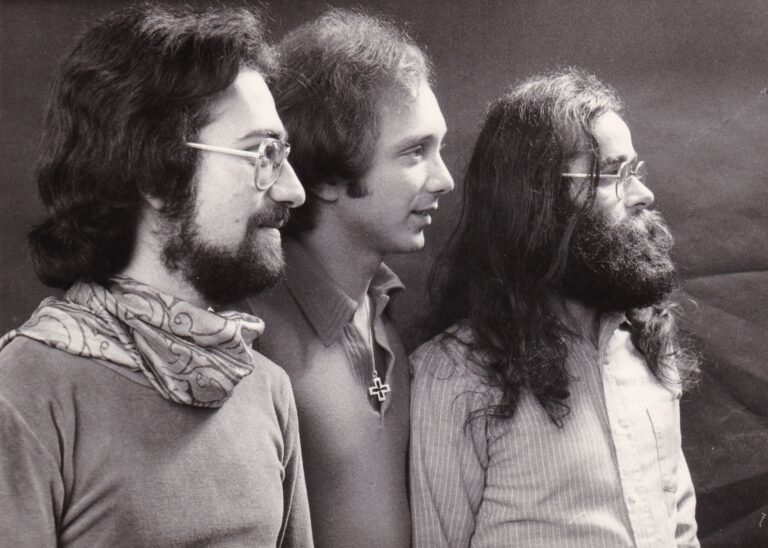 Did the size of audience increase following the release of your album?

Of course they did. Besides, we used to inform our company for each of our appearances. They organized the necessary stuff, like photo shootings, promotions in the media and magazines and as a result, our audience started gradually growing, so we acquired a fan club, constituted mainly by the youth. 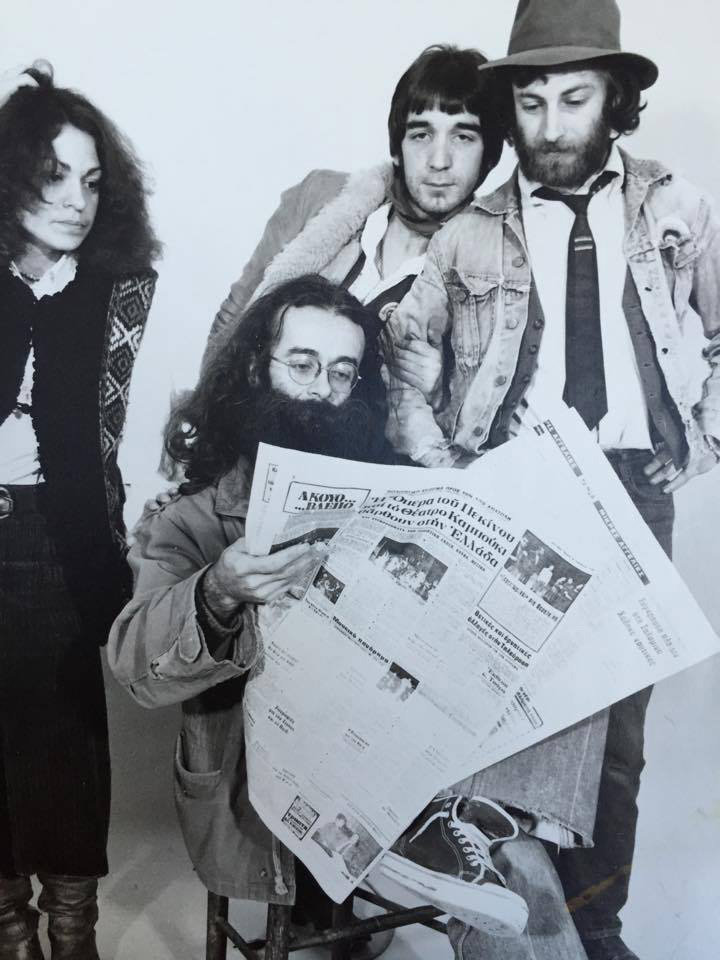 What sort of venues did Agapanthos play early on? Where were they located?

At the beginning, we were performing at theatres, basketball courts and afterwards at some nightclubs and music scenes. Some of our appearances happened to be at musical TV shows, with great success, where one or two of them were also live. We used to play mainly in the center of Athens and its suburbs, but the province was also one of our locations.

How did you decide to use the name “Agapanthos”?

It was the decision of our first producer, later journalist and politician, Terence Quick, who opened a dictionary, in order to find us a name and stood by chance at the word “agapanthus” (flower of love). After he proposed it, we all agreed and so the band was born. 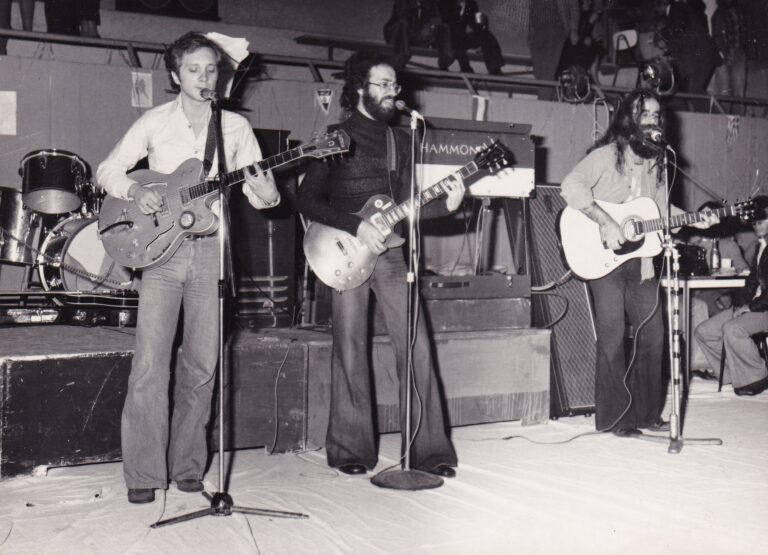 What influenced the band’s sound?

We had plenty of influencers. Among them, were Crosby, Stills, Nash & Young, The Beatles and Bob Dylan, without rejecting the influence that we obviously acquired by Dionysis Savopoulos and the international folk music. I don’t know if we managed to create our own sound, but I think that our beginning was impressive enough, as many believe till now. Moreover, that’s easily obvious from the instruments we used to handle in the studio, like the string orchestra, combined with winds like flute, harmonica and bassoon or even piano and harpsichord, except the three-guitar scheme, which was our primary concept. That is to say, we were pretty advanced as a (rock) band of that time. 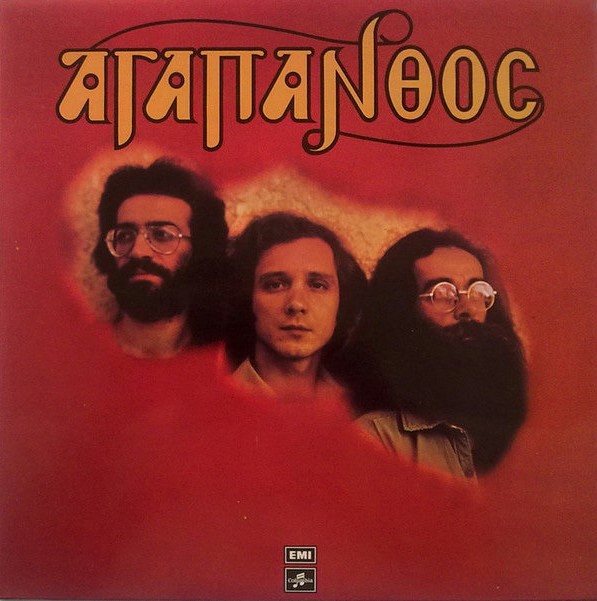 How did you get signed to Columbia Records?

At that time, Columbia wanted to create a pop-rock sector, cause until then its repertoire covered mainly Greek folk music. So, we were the only band of the company, at that time, among some other pop singers. Therefore, signing a contract with Columbia (later EMI) happened because of conjuncture. If it weren’t for Agapanthos, another group would have probably been in our place and we would have signed with another company.

What’s the story behind your debut album? Where did you record it? What kind of equipment did you use and who was the producer? How many hours did you spend in the studio?

As I previously mentioned, Yiannis Kiourkstoglou was Columbia’s producer, who brought me in contact with Dorian and Thodoros. After we decided which would be the existing material, we went to “Action” studio, in order to record our songs. Even though “Action” was then a high-tech studio, we used to record in only four channels (they became 8, 16 and 24 in the near future) and as a result, we recorded for several hours in this sequence:

All this recording procedure must have lasted at least 200 hours, if I’m not mistaken and they weren’t wasted, considering the final result. If we were in the studio today, the half amount of time would have been enough. 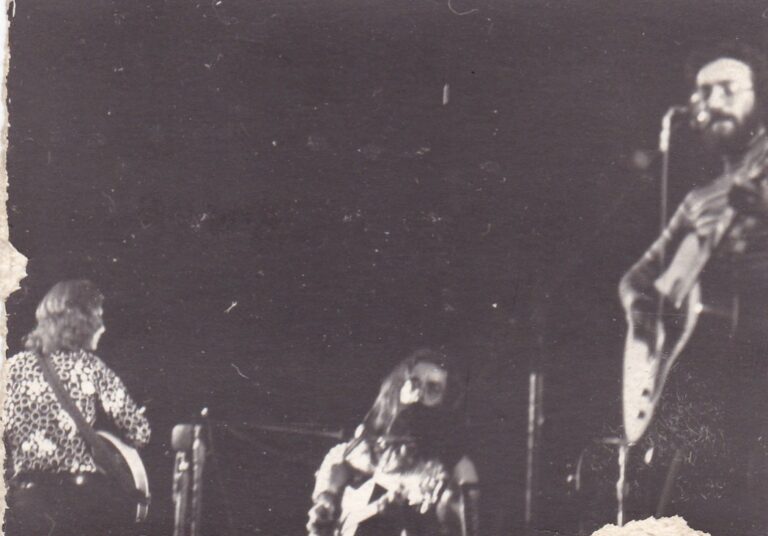 What were the influences and inspirations for the songs recorded?

The ‘70s decade was highly inspired by the ‘60s, the movements and the sociopolitical alterations (for instance: hippies, May of ’68, seven years of dictatorship etc.). It would be unlikely for all those events not to leave a mark into the international music scene and to us as well. I also think that the international folk scene and ballads had affected our music to a great extent.

Would you share your insight on the albums’ tracks?

It depends on the insight, but also on the person / means I’m about to share it to.

Was there a certain concept behind the album?

I don’t think that there was a particular concept behind the album, as we were three musicians with different personalities and approaches, concerning the circumstances of that time. Besides, each one of us had different life experiences, even though we had the same music taste, Therefore, there were three different styles regarding the composing and the writing, which was pretty obvious from the start. 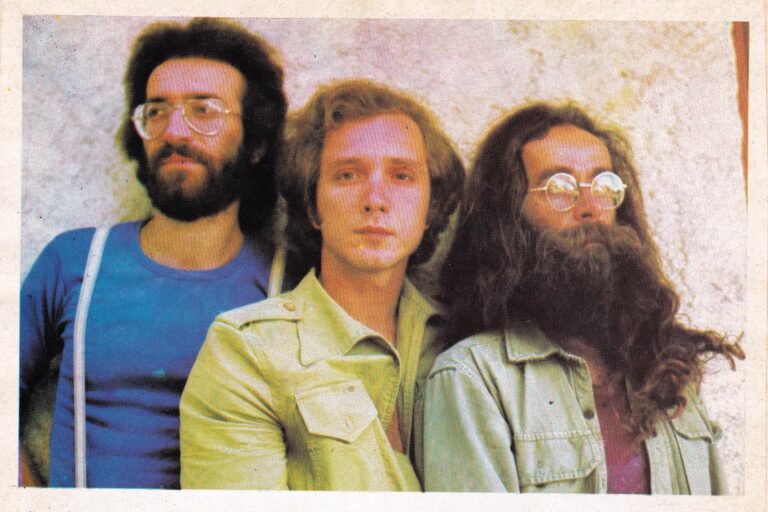 How pleased was the band with the sound of the album? What, if anything, would you like to have been different from the finished product?

I think we were pretty satisfied with the recordings’ result, but as the time passes, you always come up with new ideas and solutions that could have been applicated. If you’re asking me, there were some flaws concerning the band’s vocals, that could have been better if we had the amount of time necessary.

Did the band tour to support the LP?

Not especially, because, we used to play lots of covers of our favorite artists, except of our songs. Personally, I believe, you have to perform solely your own music (the album’s tracks), in order to support it- something we didn’t do for plenty of reasons.

How about ‘Back to the Roots’, your second album?

I’m not in position to answer that, since I had already left the band. You should ask Thodoros Tryfonas. Besides, the music’s style had already changed, from acoustic to electric.

What happened after the band stopped? Were you still in touch with other members? Is any member still involved with the music?

After we stopped as a band, each one of us followed his own path, as it is natural. I’m the only one who continued his exclusive occupation with music. For example, Dorian, who unfortunately passed away in 2009, was working as a real estate agent. All those years we were in sparse contact and we rarely played together. As far as I know, Thodoros still plays with some groups, but has other occupations as well. We have performed sometimes together, but lately, we haven’t seen each other. 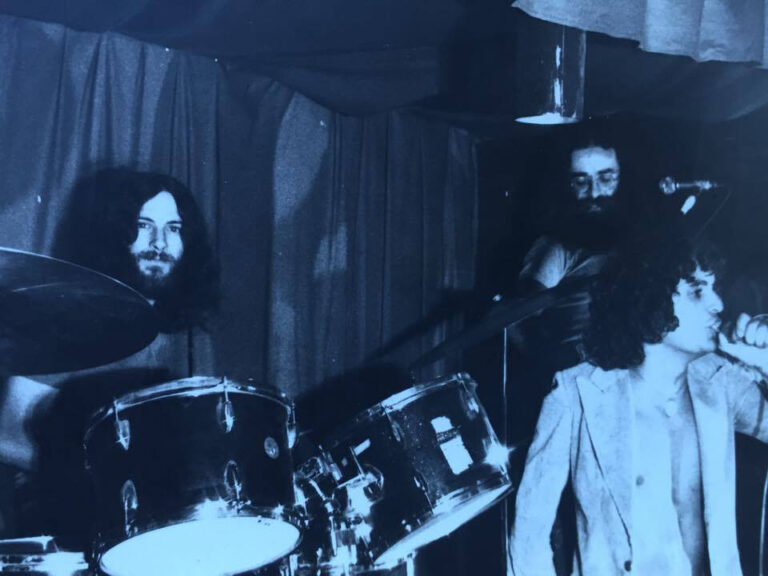 Looking back, what was the highlight of your time in the band? Which songs are you most proud of? Where and when was your most memorable gig?

The songs that I’m the most proud of until today, are: ‘O Lefteris’, ‘Ston Ilektriko’, of Thodoros songs and last, ‘Galinia’, which is mine. One of our most important appearances was the one in Deree College’s Amphitheatre, which was also one of our first ones, where we performed unplugged with three acoustic guitars. Personally, I consider as an Agapanthos highlight, our first LP, which, except of a collectible one, it is considered as one out of 30 best Greek ’70s rock albums in Greece. A ’70s all time classic!!!

Is there any unreleased material?

No, as far as I can remember. There are only some rough mixes from the album’s studio sessions. However, there is some audiovisual material from studio recordings and TV performances that I haven’t found yet. 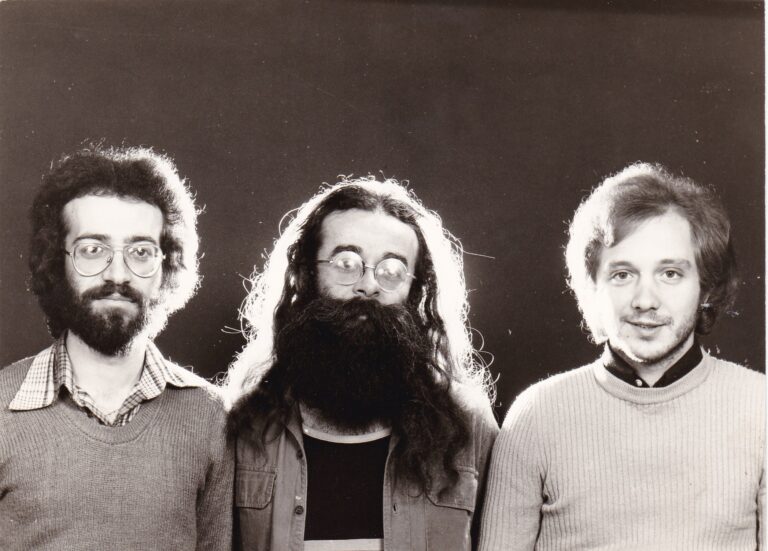 Many years have passed since the last interview about Agapanthos, they’re usually asking me about the present and the future. I have to say I was impressed when you asked for it. A young, foreign man, being curious to learn details, at this day, about a ‘70s Greek band. You must have been some kind of researcher or great admirer, in order to get occupied that much. Even though all this happened 40 years ago, I believe that this was the best period of my life and I consider myself and my generation very lucky to have lived it. We are the “70s travelers”. Every generation has its pros and cons, but none can be compared to the ‘60s and ‘70s ones, because it was then when it all happened, and all domains and that won’t change. Thank you for the “trip”. Stefanos Dekerian