Ten years ago, no one could have predicted the massive levels at which vinyl is selling. Yeah, yeah, we know, that only makes up for two percent of sales..yadda yadda yadda. The argument of how little vinyl is selling is getting stale. All the nay-sayers are having to eat their words as vinyl continues its growth, becoming the fastest growing format today.

The vinyl record is without a doubt growing well beyond the niche market it’s accustomed to and it is an exciting time for both old and new collectors. The vinyl resurgence has given new life and hope to independent record stores. Nearly every new release is getting a vinyl edition and the independent label market is thriving more than ever.

Our news feeds at GIOV have a constant overflow of articles regarding the format and, while we love reading about the love of vinyl, we get plenty of negative blog posts, too. Most are easy to ignore, due to their ignorance or strict love of the digital-standard, but some are legitimate and thought provoking, and some show a great deal of concern for the vinyl industry. People are concerned for the format sustainability due to manufacturing issues, retail cost issues and why more big-named artists aren’t demanding physical releases be mandatory.

It is time to stop bitching about these problems and offer solutions.

Here are our suggestions to ensure vinyl records remain successful.

As the major labels all but abandoned the vinyl format, the need for manufacturing dwindled to a standstill. Dozens of factories had their doors shuttered or were converted into sterile CD cutting facilities. The presses were either scrapped or sold off. The indie market, and a few select audiophile labels, continued to press records, but the demand narrowed to just handful of manufacturers in the states or overseas.

As the format has continued to grow, so has manufacturing demand and the remaining pressing companies just cant keep up. The backlog consistently delays releases which hurts initial sales. Some plants push smaller orders, like those of indie labels, further down in the queue in favor of higher volumes (and let’s be honest, dollars) which only perpetuates the problem. 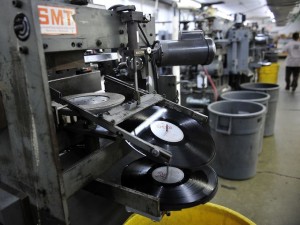 A new record press has not been made since 1984. The death of the demand forced manufacturers to simply stop producing machines and their parts. Current pressing plants must fabricate parts, and often run into situations that are nearly impossible to fix, which is at best a time consuming problem that only furthers the delay.

So why hasn’t a business started making presses again? Cost. It is estimated that creating just one vinyl press would be an investment of hundreds of thousands of dollars. However, in order for the vinyl format to continue its growth, something must be done. People with the know-how of creating these machines need to connect with those who have the capital. Some articles claim that this is next to impossible, which (of course) is wrong because anything can be created, and it’s been done before! We already know how to create the machines; The resources are there and clearly so is the demand.

Vinyl has become a major money maker for both independent and major record labels. This infusion of revenue has come at a good time with the digital download market on the decline, and streaming beginning to dominate. Compared to the fractions of cents that are paid in royalties in the streaming market, vinyl makes dollars. However, due to its market share, the major labels and their distributors continue to make it difficult for retailers to move their product. While store owners can still take chances on large orders of CD’s for big releases, due to the buy back option, the same deal is not offered with LP’s. Therefore, shop owners are forced to order limited quantities, maintain a special order policy, or risk an outdated release collecting dust on their shelves. This does not have to be the case. We have spoken to dozens of store owners who tell us that if the labels would offer the buy back, and offer them more promotional materials, they could increase their orders significantly. 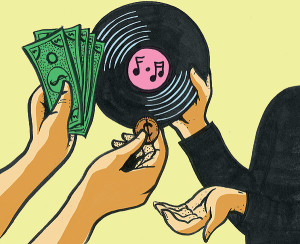 Another business practice that the labels could change is also the most important; pricing. While the vinyl record market continues its comeback, more and more labels are increasing their per unit cost. Some major releases are nearing $20 wholesale which only makes it harder and harder for the struggling independent stores to offer a fair price. Wake up labels! The physical music market went bankrupt due to high pricing! Now you have a second chance and you still haven’t learned your lesson! Vinyl collectors do have a threshold, they will buckle and refuse to pay the outlandish prices for super-deluxe-edition collectibles. There will come a point when the jacked up wholesale will force even the most loyal record store customer to shop online. It is time for these labels and distributors to get their head our of their ass and realize that independent record stores are essential to their survival as much as they are important to the stores. The labels cannot generate enough physical sales in an online-only marketplace in order to keep it viable.

It has long been debated whether or not the artists have been hurt by the digital standard. Some claim that digital sales and royalties have more than compensated their lost physical sales, while others have been more vocal about the loss of revenue. In either case, artists and bands hold more power than the labels, stores, and distributors combined!

While many bands have made their love of independent record stores known in interviews, much fewer have taken the step and actually exercised their power with their labels. Some bands, such as Spoon, have made it a point to reward independent record store customers but it is essential that many more big-name artists do the same. It is time artists start talking about their physical releases. It is time they start living up to their words and encourage their fan base to support record stores instead of just carpet bombing the iTunes link through their social media outlets.

Everyone wins when labels, distributors, record stores and their customers work together to further the success of the vinyl industry. While it will never overtake digital sales, it doesn’t have to and it doesn’t have to try. There is a healthy market for both, and it is time to give the same power to the format that offers the most profit to the stores and the most enjoyment by it’s consumers. 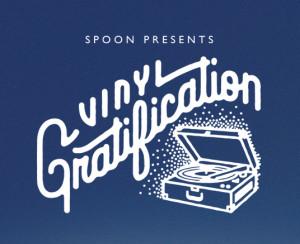