The top 10 most collectable Toronto albums of all time

The top 10 most collectable Toronto albums of all time

For avid record hunters, Toronto's abundance of used record stores and high-density turnover can be both a blessing and a curse when trying to track down a specific slab of rare wax. Luckily, we've compiled a list of some of Toronto's own highly sought after original pressings. 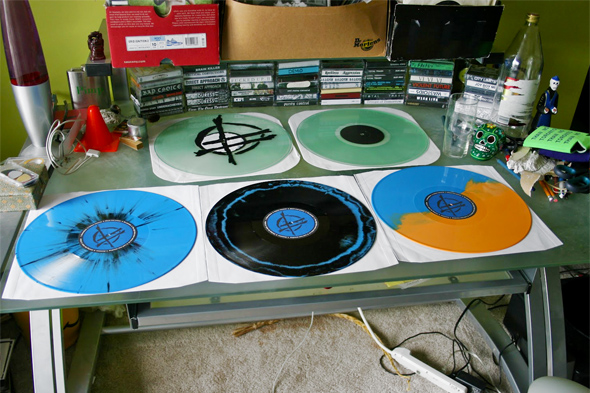 Although names like Rush and Fucked Up may be the only familiar artists found here, crate diggers and record store owners will surely covet some of these titles currently fetching high prices online. Categorically, older and obscure original pressings demand the most cash, but reissues have made some of these titles a little more affordable to enjoy for the non-discerning.

Here are the top 10 Toronto albums to keep an eye out for while thrifting for gold.

The Ugly Ducklings - "Somewhere Outside" (1966, York Town)
Referred by June Records' Dennis Reynolds, The Ugly Ducklings were a prime example of Yorkville's 60's garage rock scene, creating a fuzzy, proto-punk sound utilizing distorted guitars, groovy bass and driving rhythms, best exemplified in its first track "Nothin." The band released several singles and Somewhere Outside before disbanding in 1974, but appear to have reformed intermittently, presently being listed as active. The original mono pressing, released by homegrown York Town Records, is currently worth upwards of $150 on Discogs.


Nucleus - "Nucleus" (1969, Mainstream)
Easily confused with Ian Carr's British fusion band of the same name, the Canadian Nucleus originally sprang from a Rolling Stones cover band formed by the members in grade school. After opting for a "cooler" identity, they changed their name to The Lords of London before finally settling on Nucleus, adapting themselves into a spacey, progressive rock sound. The original Mainstream Records pressing is currently worth up to $80 via Discogs.


Christmas - "Heritage" (1970, Daffodil)
Described by the staff of Rotate This as driving, 70's hard rock, Oshawa's hard-to-Google Christmas were a blast of MC5-style energy, led by 18-year old Bob Bryden (formerly recording as Reign Ghost). Heritage, the band's second release, is a holy grail of Canadian rock majesty, as the original Daffodil Records pressing is worth over $300. Highly recommended.


The Folklords - "Release The Sunshine" (1968, Allied)
Hailing from the nether reaches of the Canadian folk-rock movement, Toronto's own obtuse offering The Folklords surfaced for a brief period with the Forty Second River/Unspoken Love 7", closely followed by Release The Sunshine in 1968. Seemingly making no impact upon its release, the album faded into obscurity until its rediscovery beckoned collectors to shell out over $300 for near-mint pressings. Luckily, trusty Light In The Attic have reissued an affordable alternative to its valuable original Allied Records press.


Rush - "Rush" (1974, Moon)
Although other issues of this familiar Canadian prog-rock classic are both affordable and plentiful, few are aware that the original pressing is worth over $500. Released in Canada under the band's own Moon label, it was limited to 3500 copies, which quickly sold out. Identifiers (besides the heavy price tag) include the awesome Moon Records graphic, as well as a printing error that left the enigmatic font pink as opposed to the intended red. Good luck tracking this one down.


Sweet Daddy Siki - "Squares Off With Country Music" (1972, Arc)
Some may know him for his trademark "Neck Breaker" hold and his "Coco Butt" head-hammer. Others know him as the animated host of Saturday afternoon karaoke at The Duke. Few, however, seem to be aware that Toronto's favourite glam-wrestler also cut a few albums in the 70's as a skilled country musician. Squares Off With Country Music goes beyond the novelty of, say, Mohammed Ali's dental hygeine-themed record, with excellent honky-tonk classics like "Jambalaya" and "Tiger By The Tail".


Viletones - "Screamin Fist" 7" (1977, Vile)
Toronto's Viletones hold a special place in Canadian punk history, having a hand in blowing off the doors at The Horseshoe Tavern during the Last Pogo. Their debut 7" paved the way for modern hardcore fetishists, and original copies of their own Vile Records pressing go for around $100 online. As an interesting aside, this single also inspired another brand of TO punk lore: its title was adopted as a key plot point in William Gibson's 1984 cyber-punk classic Neuromancer novel.


One of You - "Life Is So Hard/Faded Flowers" 7" (1981, Scarab)
Info is scarce on this outsider folk 7". What is apparent, however, is that it was recorded by a Czechoslovakian woman who had emigrated to Toronto during Prague's political upheaval in the 60's. Here, her loneliness in a foreign setting is accompanied by what sounds like an organ run through an echoplex. One of three 7"s released by her and her husband under their homemade Scarab label (subsequent releases were packaged in folded photocopies), Life Is So Hard/Faded Flowers is an endearing piece to keep in mind while digging through bargain bins.


Folkways - "Electronic Music: University Of Toronto Electronic Music Studio" (1967, Folkways)
Although Folkways operates under the stipulation that all of its releases must remain in print, an original 1967 vinyl copy of this engrossing collection of early Canadian avante-garde is difficult to track down. All pieces were recorded as part of The University of Toronto's Electronic Music Studio, recalling the musique-concrete experiments of the French Groupe de Recherches Musicales or Karlheinz Stockhausen. Toronto noise/drone community: take note.


Fucked Up - "Let Likes Be Cured By Likes" (2004, Schizophrenic)
What list of TO's rare records would be complete without the inclusion of this prolific source of limited/unique releases? Amongst a pile of other digger-bait, Fucked Up's Let Likes Be Cured By Likes was released in a short run of 444 clear, single-sided copies by Hamilton's Schizophrenic Records. Recorded live at the Rivoli in 2002, it's a glimpse of the early days of the band; an expensive glimpse at that, with copies topping $100. Later issues come in a variety of colours, but what serious collector wants the reissue?

Maestro Fresh Wes - "Symphony In Effect" (Attic, 1989)
Although not as difficult to attain as the above albums, your Hogtown hip-hop collection isn't complete without the wax that houses the "Let Your Backbone Slide".